Getting to Know Grandparents

We LOVED doing this letter activity a few years ago, and I posted about it here last year - 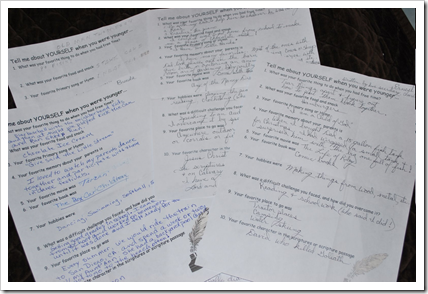 So I thought this new idea would be fun for the kids.  I printed up "This is My Life" booklets.  I then paired up each of my older kids with one of their grandparents that they are close to.  I originally was going to take all of them to a restaurant and have each pair sit at their own booth and share a dessert or appetizer.  BUT we were sooo exhausted Saturday that none of us wanted to go anywhere.  So they each found a spot around the house and filled in a few pages of the book.  I had the kids interview their grandparent but then told them they could take turns with the grandparent writing in the book.

I had fun listening in to the various conversations when I went around snapping pictures.

Nathan and my dad were talking about Work.  My dad told Nathan that his first job was working in the potato fields in Idaho.  He worked from sun up to sundown all week and would earn $25.  Nathan was quick to say, "WOW!  I just pulled weeds for one of my mom's friends for a half hour and she gave me $10."  They kept talking about jobs and money as I left them. 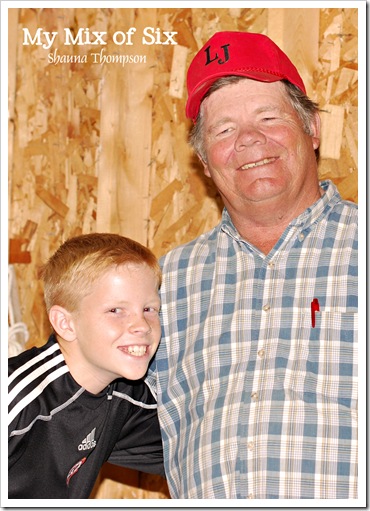 Then I came into Grandma Brenda and Rebecca giggling on the bed.  They were talking about Brenda's first boyfriend named Butch.  Rebecca was hanging on to every detail. 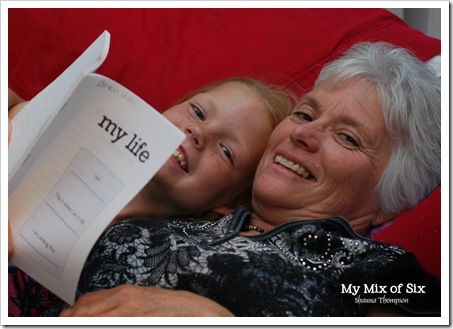 Grandma Charla and Kaylee were all business trying to fill out as much of their booklet as possible.  Of course they DID fill out the most pages.  Doesn't that sound like mom - GO GO Get it ALL done. 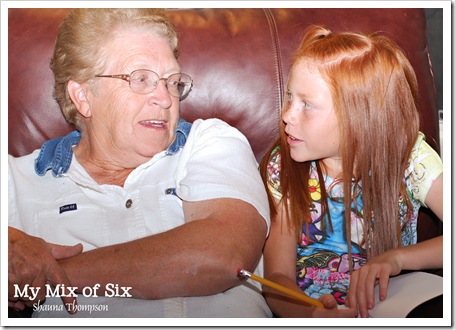 Then Grandpa Don and Jacob were all hush hush as I approached with my camera but of course had big smiles for their picture. 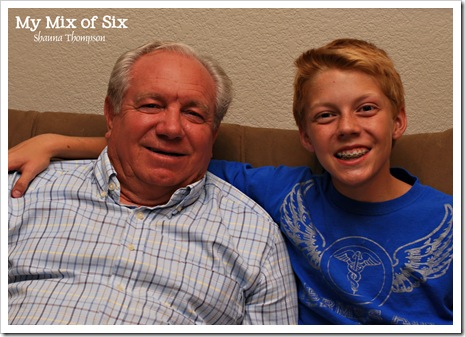 I gathered all the booklets and vowed that we will send letters and do some phone calls to answer more of the questions.  Both sets of grandparents are such rich resources for the kids to learn from.  A big thanks to all four of you for taking the time to answer their questions!

That is such a cute idea! My kids are all but out of grandparents, so maybe I can make my kids do this when 'I' am the grandparent ;)

This is an awesome idea! Rock on...

How wonderful! Glad you take pix of special things like this (I do, too!).

SPEAKING OF PHOTOS: All pictures are copyrighted. Do NOT use any pictures of my kids without my permission!

However, feel free to use any pictures of crafts, projects, and recipes. They are HERE to be shared with YOU!